Game of Thrones: Is the Casting Accidentally Racist? (Some “Kissed By Fire” Spoilers Ahead)

I love Game of Thrones, God knows I do.

The scheming.  The action.  The ridiculously clever dialogue.  The Lannisters, who always pay their debts.  And this last episode did not disappoint, featuring a  a medieval light saber courtesy of the Lord of Light.

But there is one thing about one of my all-time favorite shows that is making me angrier than Arya on the day of her dad’s execution.

Why in the seven hells are almost all of the Black characters slaves and savages?

Calm down and keep reading.

I know full well that there have been a few GOT characters of colors who weren’t in shackles or channeling Conan the Barbarian. Kudos to the colorblind casting of Xaro Xhoan Daxos and Salladhor Saan.

But generally, there is an unsettling casting practice of non-whites as brutes and enslaved folk that has been consistent from Season 1.

Bolstering the theory of this not-so-accidental color coding, consider that before the deluded dictator-in-the-making got his (ahem) golden crown, he was essentially grousing about the white man’s burden as if he were Rudyard Kipling reincarnated. He groused constantly about the “savage” Dothraki and schemed to use their brawn to get his narrow behind on the Iron Throne.

I’ll tell you right now, I was ready to throw in the towel on that alone, but I pressed on.  I am a devout GOTee.

But after seeing this week’s episode, “Kissed By Fire,” I can no longer remain silent, as this show’s popularity skyrockets.  Even if you write off the Dothraki as sun-kissed, not necessarily ethnic individuals, puh-leaze tell me why the slave army known as the Unsullied (those we’ve seen without helmets, anyway) are also brown.  Peep our newest character, Greyworm below.

And once we get to the bottom of that, explain to me why Daenery’s new handmaiden and translator, Missandei, also brown. 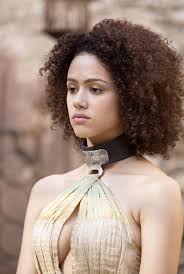 I know for a fact that I am not the only one who finds it mind-boggling that in a world of dragons, lords of light, smoke baby demons, and little girls with scales on half their faces, Hollywood can still only see people of color in the slave role.

Sure, I get that Daenerys is in a hotter climate than her winter-fearing would-be subjects, but this is a fantasy series. Surely, the people she’s dealing with could be blue, purple or yellow with maroon stripes and nobody would bat an eye.  And even if the book describes a character in one way, we know damn well the show has strayed from that narrative.  So no more excuses or ignoring the obvious.

Your Turn: Is “Game of Thrones” falling into age-old stereotypes with the casting?  Or do you totally understand why certain characters look as they do.  Feel free to disagree, but keep it civil.