Truebies, let us bow our heads for a moment and reflect.

Let us wish as hard as we can, with every bone in our Bon Temps-loving bodies, that we do NOT ever see a season like this again.  I thought the werepanthers were awful.  I grew to loathe the Maenad, but the boring, easily defeated villains (Warlow, the Governor, Sarah Newlin) made previous parties look like carefully crafted “Game of Thrones” characters by comparison.

This season sucked harder than Pam on a patron at Fangtasia, and there were few,  if any bright spots, unless you count Sookie’s recurring ball o’ light.  But we made it through, and I was hoping the end, “Radioactive” would offer redemption, a tantalizing teaser, a cliff hanger…something.

Instead, we long-suffering fans get slapped in the face with day-walking (drunk) vampires, scenes that looked like Old Navy and Skittles commercials, plus the awful realization that Sookie may have the power to zap vamps, but she may well be the weakest, whiniest female character since Olive Oyl.

And that is saying a lot.

Further, the whole six months-later device was tired and abrupt, catapulting Sam Merlott into politics (really? the hidingest man on the planet is Mayor?) and humans are willingly feeding themselves to healthy vamps to thwart Hep-V infected ones? I see nowhere positive this could go, and quite clearly, the Hep V horde at the end smacked of a “Walking Dead” herding device.

But let me start with the worst plot decision of the episode, and that is the seeming sacrifice of my favorite fanger…despite his embarrassing portrayal this year.  Writers, you would do well to explain yourselves regarding:

I know they didn’t kill Eric.  I KNOW they didn’t kill him.  You think I’m kidding about my distress, but this is exactly what happened.  I saw Eric reclining naked on the snowy mountain.  I saw the sunlight power vanish from his sinewy Viking frame, post Warlow-staking.  And then the finest fanger to walk the earth started burning.  Before I knew it, I was on my feet screaming “Nooooo!” like the surviving partner in some action-buddy flick. But this has got to be a ruse.  If that raggedy Terry Bellefleur got a two-episode funeral after a slow, burning build-up to his self-imposed death, I will absolutely snap if this send-off is real for Eric.  Our only hope is that Pam, who seemingly also can fly like Mighty Mouse and is in hot pursuit, is on the way with a blanket to toss on her magazine-reading Maker.  While she’s at it, she’d do well to tell him to read his Southwest magazine underground in a bunker like any smart sanguinista.

So, Warlow went from whiny to Ike Turner all in one encounter, huh?  All it took was one delay from Sookie to force him to show his true colors.  The writers must have gotten as bored of this weird, meandering character as I did.  I knew things were going south when he set up that lame Maypole in the middle of a set that looked like one of those weird Skittles commercials.  But when he straight up gave Sookie a mouth shot simply for asking him to get to know her before they wound themselves into the branches, even I had to say “hol’ up.”  Sookie is back to her annoying self, but that mess was uncalled for.  And for an ancient vamp/fairy, that fool sure was dispensed with quickly once Jason, his new boo, Andy and his fairy daughter came a calling.  I knew old Gramps would be coming back from the other side of the shaving mirror in Gram’s house, but the corny two-piece he and Jason enacted on Warlow was a rather hasty end to a poorly crafted and confusing character.  Somewhere, Russell Edgington is laughing. 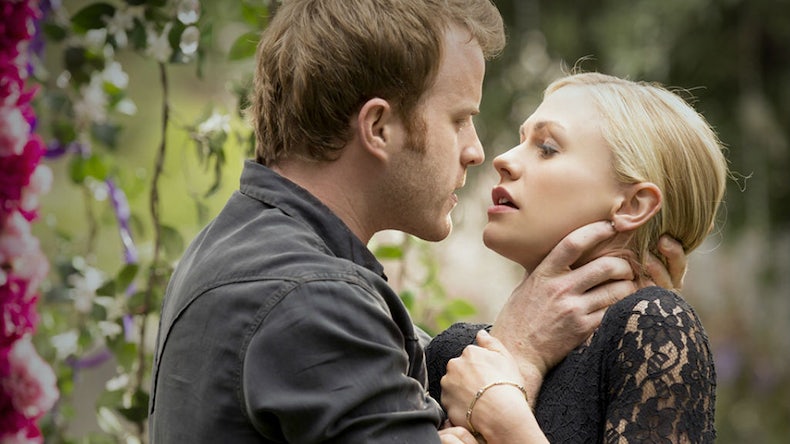 I am willing to bet that Tyler Perry guest directed that ridiculous scene where Tara is reunited with, and decides to feed on, her wig-wearing mama.  (Why is that every time that woman comes on the scene, I feel like I’m watching a community college production of “The Colored Purple?”)  I was praying that as “momma” bleated for her daughter to feed on her that Tara would not curl up in her lap, fetal style because honestly, that is where I saw it going.  That, sirs and madams, would have caused me to turn off my DVR, knock my TV onto the floor and walk out into the night air seeking respite.  I cannot, with that imagery, and I resent “True Blood” for even allowing me to think it could happen.  But if you’ve watched Sookie and Warlow, or Jason and his faux Gina Gershon boo, you know how my mind could have gone there.

Sookie clearly is the most co-dependent being on the planet.  She so frustrates me!  I wanted to call Iyanla Vanzant and Dr. Phil to simultaneously bosom crush and browbeat her back to sanity.  So, Bill let her down with his god complex.  Her old flame Eric is in flames on a mountaintop.  Warlow went from Ronnie Romance to brute in the space of 10 minutes.  Why would she immediately cozy up to Alcide whom she thwarted for ages?  (Also, recall homegirl tried to get up on Sam Merlott before he told her to kick, push her way out of his face in favor of Nicole.)  Sookie, come on, son. I realize that love doesn’t last long on this show, but this allegedly plucky Southern belle is a poor example of a heroine.  She needs to take a time-out from dating any supe who makes moon eyes at her. Next thing you know, she’ll be dating that Maypole that Warlow built for her.

“V” is for Vendetta

But being a serial monogamist is the least of Sook’s problem at the mess that passes for a cliffhanger.  We see demented, blood covered vamps vibrating through the clearing at a party which Mayor Sam and newly wealthy Arlene have staged to matchmake fearful humans and “protector” vamps.  Clearly, all this shindig turns out to be is a buffet for the diseased hep V vamps.  As I alluded in the beginning of this post, I do not appreciate the obvious parallels to “Walking Dead” where zombies, almost ineffective alone, turn into ravaging hordes when they gang up.  And it does seem dumb that patrons at the newly named Bellefleur bar and grill would be encouraged to get drunk and gorge themselves on ‘gator when they are facing imminent threats from an even more messed up faction of the undead.  Still, I didn’t get that feeling that I HAVE to know what the next season holds.  And that, my friends, is a bad sign.

For a parting shot in this silly finale, I gots to say a few words about some wayward wig pieces because the show’s hairstylists were doing the MOST.  (1) Tara, get that swoop bang off your face.  That hideous hairstyle aged you ten years, minimum.  I don’t care if six months passes or six years passed, not a good look.  She and her mother looked like twins.  (2) Alcide looks like he fought a Flowbee.  Though I had gotten sick of his wolf mane, his new clean cut look is not flattering either.  However, I will take some of his ab action any day.  Please, and thank you.

YOUR TURN: What did you think of the season finale of “True Blood?” Should this series have ended already or are you left wanting more?